Where do quilt blocks get their names?

A friend of mine and I will be teaching a quilting class at church and I thought it would be nice to tell the ladies why a block has the name it has.

Like how did the Ohio Star get its name?

While I don't consider myself knowledgeable in the history of quilt block names, I do have a personal anecdote that may be of interest to you and your group. 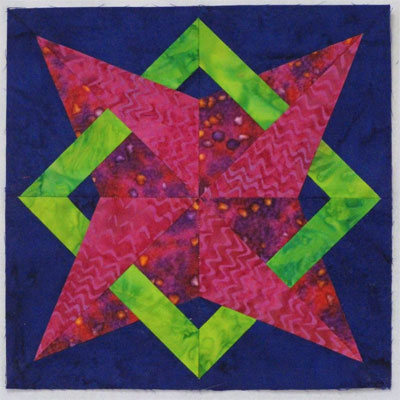 The website page and resulting pattern came about because a gal by the name of Nell wrote to ask if this block had a name.

I researched in the quilt block books and software that I have:

Clicking any of the underlined titles above brings you to Amazon where you can learn more and/or purchase each.

I came up with nadda. Nothing. Some quilt block patterns were close. But just not quite right. (Click here to read about my efforts to locate the block name.)

So I drafted the block into Electric Quilt 7, turned it into a paper piecing block in a couple of sizes for you to download (because I personally don't like to work with templates) and called it 'Nell's Star', after Nell M., the lady who asked the original question.

A couple of years after the page was originally published I received an email from Judy Martin (Yes! THE Judy Martin! - that was cool! She was so gracious!) informing me that the block was originally hers and published in Quilters Newsletter Magazine several decades ago.

With this new information, I updated the page and the block now carries the name Judy gave it—'Charleston Quilt'.

How I think quilt blocks get their names...

Even in this computerized age, I was unable to find any reference to Judy's block before I published the page. Without a name to go on, I combed through drawings of blocks that were either 8- or 4-pointed star block patterns or 4-patches (the grid the block is drawn on).

I came up with nothing.

Now imagine back in time.

Even before light bulbs.

A gal sees a quilt that she'd like to make and stores a mental image in her mind. Or perhaps she's just playing with shapes and comes up with something she's never seen before.

There's no library to go look for the block in pattern books.

The quilter has no idea what the name of the block is. So she gives it a name that has meaning to her or to the project she's working on or to the person who'll receive the quilt.

That's exactly what I did when I named the block Nell's Star (now known officially as Charleston Quilt). An honest mistake. But there are now many people that when they see that block think of it as 'Nell's Star'.

The 'Ohio Star' you asked about is also called: Eastern Star, Eight Point Design, Eight Point Star, Lone Star, Shoofly, Star, Texas, Texas Star and Tippecanoe and Tyler, Too. (At the bottom of the pattern page, you can see many of the variations on the Ohio Star block design.)

That's a lot o'names for one little nine patch quilt block. A lot of interpretations by quilters through the years. (I wonder if some of them were thinking of home when they named their blocks.)

Ann, I hope this little story may be of interest to your group.

Readers, if you have more information on how quilt blocks get their names, please share using the 'comments' link below. Thank you!

You, too, can EQ!
Why not start today?
CLICK HERE
Remember to use the code,
EVERYTHING, at checkout.