Fabric bunches up when sewing corner to corner I'm trying to sew corner to corner diagonally through a square.

My problem is the material bunches up and the material won't move evenly under the pressure foot. So I end up with a bunched up knotted corner.

I've made sure the feed dogs were up.

Thank you for your time.

I hate it when that happens. Thank goodness there's a simple fix!

I call it a 'spider' because that's what it looks like after I've been sewing for awhile. Some call it a 'bunny tail'. Whatever you call it, it's a scrap piece of fabric (right) that gets fed into your machine first. 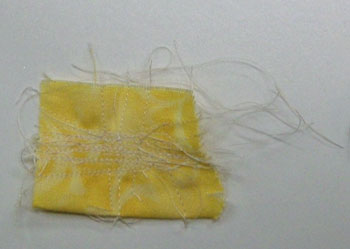 You stitch across it and then immediately feed your square in next...just like chain piecing where you continuously feed sets of patches into the machine without cutting the threads in between.

Since it's not the first stitches grabbing into your square, there's less tendency for the stitches to eat your corners.

The benefits are two-fold:

1) You avoid the bunching that you are currently experiencing, and...

2) You save thread because you're not pulling out a long thread tail for each pair of patches you sew.

Now if you really want to get productive...

Bonnie Hunter (of Quiltville.com fame and a scrap quilter extraordinaire) has taken this idea a step further. Instead of sewing on this scrap of fabric, she has generic patches for other quilts already to sew...i.e. a box of two inch squares.

Instead of sewing on the spider first, she just sews two of the 2" squares from her box together. Voila! Extra piecing done, without feeling like it's extra work. Eventually all her 2" squares get sewn together and perhaps she joins those next as four patches, again using them instead of the 'spider'.

She's got several books on the subject, the most notable called "Leaders and Enders" which showcases this technique.

I hope this has been helpful. Thank you for your question.

You, too, can EQ!
Why not start today?
CLICK HERE
Remember to use the code,
EVERYTHING, at checkout.
SALE ENDS 11/30/22